Homearama 2013 is less than 2 months away and work on the homes in Rock Springs is well under way! Here's a rare opportunity for you to tour one of the Elegant and Energy Efficient homes coming to Homearama 2013! This newest creation from Leo Thieneman and Sons LLC. is a State of the Art Energy Efficient home sure to be one of the centerpieces of Homearama in Rock Springs. It's available for purchase now or can be built to order. Walk past a covered front porch and into a formal entry with formal dining room on the right with corner column and decorative panel ceiling. Ahead an impressive Great Room with beam ceiling, built in bookcases, gas fireplace with surround and wood mantle and audio feeds for a house sound system. The great room flows into the kitchen in this open floor plan designed for family gatherings and parties. The kitchen features New light gray/beige custom cabinets with dove tail soft close draws, granite countertops and large center island with seating on both sides and built in bookcase on one end. There are Stainless steel upgraded GE Cafe Line appliances including a duel fuel 5 burner Gas range and electric oven vented to the outside. A brick accent wall in the kitchen that ties into the additional gas fireplace and surround wired and ready for your flat panel TV. The brick accent wall will also serve as a back-splash for one wall of kitchen cabinets. The 1st floor Master Suite features a trey ceiling and two rounds of crown molding, corner down lighting and decorative chandler in the middle for a more elegant look. The master bath features a double bowl vanity with granite top and under mounted sinks, framed duel mirrors and decorative sconces. There's a Bubble air jet soaking tub and large separate ceramic tile shower with seamless glass door. You'll appreciate the upgraded master closet with custom California style shelving....

College Basketball is not the only thing on the minds of many in Louisville in March! Buying a Louisville home also ranks right up there. The number of homes going under contract in March 2013 skyrocketed when compared to just one year ago. Louisville experienced a 20.31 percent increase in homes going under contract. The number of homes sold and closed last month also increased when compared to 2012 by 15.66 percent.

With the average selling price up $8000 and the average median price up $5000 over March 2012, the numbers are encouraging for any Louisville homeowner thinking about putting their home on the market. Add to that a major increase in buyer activity and the number of homes on the market, (6,351 as of this blog post) and you have a formula that could see a shortage of Louisville homes to sell in the near future. 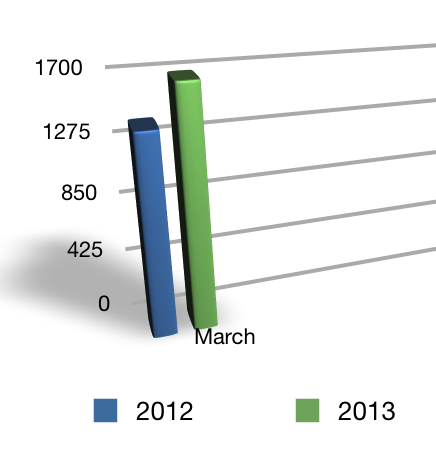 Many sellers may be sitting on the sidelines waiting for home prices to increase or a sign that the housing debacle of past years has officially passed. Slowly the news media is picking up on the fact that home sales have picked up. There have been a number of national stories on the increase of home sales, and Louisville’s Courier-Journal has reported one or two stories about an increase in local sales. But it’s far from being enough. Were constantly talking to potential sellers who have no clue where the market is and where it’s going.

In the meantime we’re seeing multiple offers on some new listings and a number of our Medley Sokoler Team agents are desperately looking for the right home for their buyers. It’s a unique situation; just two years ago real estate agents...