Louisville Kentucky - the third best place in the United States to retire! 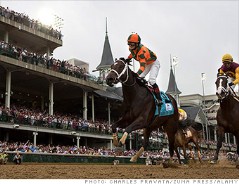 We knew the city of Louisville Kentucky was spectacular, but
now much of the rest of the world knows it as well. According to a new Money
magazine report that points to the best 25 places in the United States to
retire, Louisville Kentucky ranks number Three!

Coming in just behind Portland Oregon and Albuquerque New Mexico the new 2012 Money magazine report points to Louisville's love of horseracing, bluegrass music,  Downtown District, waterfront Park, Broadwayshows and the Kentucky Center for the performing arts. Money Magazine's Sarah Max writes "The first Saturday in May, all eyes are on Louisville, home to the Kentucky Derby. Yet there's also plenty else to do and see year-round".

The magazine article also points out that we've improved our
biking and strolling trails in the Louisville Loop and adds that the pedestrian
path will eventually wind more than 100 miles connecting many of our parks,
neighborhoods and attractions. For those of us who live here the honor of being
ranked third in the nation as a place to retire comes as no surprise, for those
people living around the country thinking about a place to retire, this article
should be eye-opening!

Money magazine reviewed cities all around the country and says
they based  their report on the median
home prices, state income tax and things to do in deciding their top 25 places
to retire list. The news can only be interpreted as spectacular for our city. As
word gets out  around the country anyone
considering retirement will be taking a much closer look at Louisville. We
probably won't see any immediate increase in housing prices, but any time
publicity like this is published you can draw a direct link to increased
tourism and eventually people considering Louisville as a destination to either
visit, move to or retire and why a piece of Louisville real estate.

For more information about Louisville Real Estate or to work
with the hardest working Real Estate Team in Louisville Kentucky “The Medley
Sokoler Team at 10525 Timberwood Circle, Louisville KY 40223 head to
https://www.weselllouisville.com or call (502) 376-5483.